Since the 1960’s when the Johnson Administration passed the Elementary and Secondary Education Act (ESEA) as a part of the war on poverty, legislation to address education standards has been reauthorized multiple times. One of the more recent and controversial reauthorizations was the “No Child Left Behind Act” (2001) enacted during the Bush Administration. This year, both the United States’ House of Representatives and the United States’ Senate have passed their own versions of a reauthorization bill. As a result, they must meet at a conference and work together to create one bill for reauthorization. While mandatory annual testing has held strong in both versions of the bill, they do differ in other areas and will require compromise. The House version, which is known as the “Student Success Act,” promotes accountability on a state level as opposed to a federal level and claims to give control and autonomy to parents and local level education systems. ﻿The Senate bill, which is called the “Every Child Achieves Act,” claims to push for state level accountability as well as giving states room “to innovate”.﻿ The bill also needs to meet the approval of the Executive branch and the Department of Education who are pushing for an increase in accountability and may not be satisfied with leaving it to the states.

Attention to the overhaul of “No Child Left Behind” is not new, and has been rising especially since the law has failed to achieve its perhaps most ambitious and very specific goal: ensuring every child in the United States can read and do math by mid-2014. Since the law passed, scores on National Assessment of Educational (NAEP) only showed modest increase in both math and reading in elementary and middle school (Figure 1). No doubt, scores have been slowly and steadily increasing, but the scores were increasing before the law was passed, making it unclear whether “No Child Left Behind” caused any improvement, or if it did, which part of the law contributed the most. 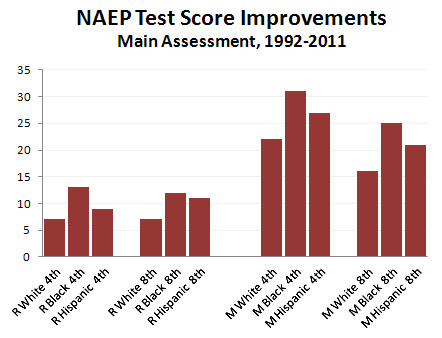 The law’s emphasis on standardized tests, coupled with penalties placed on the schools that failed to achieve the proficiency target, led some school districts to bad practices, like cheating on tests.  As a partial solution, the Obama administration essentially allowed states to make policy changes to waiver out of the consequences in “No Child Left Behind.” Some of the policy changes include adopting new standards or developing new ways to evaluate teachers.

The Senate’s “Every Child Achieves Act” seeks to address the same issue with “No Child Left Behind” by allowing states to determine proficiency standard on their own.  The “Every Child Achieves Act” gives state governments more latitude in enforcing the law with schools. Though the annual tests and goals set for students would remain (including at the minimum tracking and reporting of several standards such as test scores, graduation rates, english proficiency rates, and others), states could determine how much weight each criterion receives[1]. Each state would then submit the plan to the federal government, which would then have 90 days to approve the plan. Not only does this plan give states more power in determining high- versus low-performing schools, but it also gives them more jurisdiction over handling low-performing schools.  However, the House’s “Student Success Act” is overall more conservative. It does not require states to hold schools accountable for test results, but rather maintains that schools administer annual state tests[2﻿].  It also does not define how states should hold states accountable for poor performance, and enables parents to allow their children to opt out of testing.

Though neither bill represents a huge shift from current legislation, there are significant differences that represent the next progression of education policy that will have implications for the future.